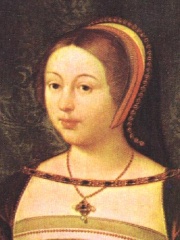 Margaret Tudor (28 November 1489 – 18 October 1541) was Queen of Scotland from 1503 until 1513 by marriage to King James IV. She then served as regent of Scotland during her son's minority, and successfully fought to extend her regency. Margaret was the eldest daughter and second child of King Henry VII of England and Elizabeth of York, and the elder sister of King Henry VIII of England. Margaret married James IV at the age of 13, in accordance with the Treaty of Perpetual Peace between England and Scotland. Read more on Wikipedia

Among companions, Margaret Tudor ranks 62 out of 673. Before her are Isabella of France, Sita, Zayd ibn Harithah, Claude of France, Isabella of Portugal, and Tiye. After her are Maria Feodorovna, Antinous, Poppaea Sabina, Sophie, Duchess of Hohenberg, Elisabeth Christine of Brunswick-Wolfenbüttel, and Sepp Dietrich.