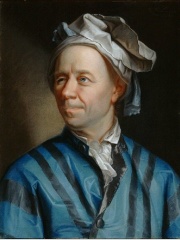 Leonhard Euler ( OY-lər; German: [ˈɔʏlɐ] (listen); 15 April 1707 – 18 September 1783) was a Swiss mathematician, physicist, astronomer, geographer, logician and engineer who made important and influential discoveries in many branches of mathematics, such as infinitesimal calculus and graph theory, while also making pioneering contributions to several branches such as topology and analytic number theory. He also introduced much of the modern mathematical terminology and notation, particularly for mathematical analysis, such as the notion of a mathematical function. He is also known for his work in mechanics, fluid dynamics, optics, astronomy and music theory.Euler was one of the most eminent mathematicians of the 18th century and is held to be one of the greatest in history. Read more on Wikipedia

Since 2007, the English Wikipedia page of Leonhard Euler has received more than 2,996,657 page views. His biography is available in 142 different languages on Wikipedia making him the 7th most popular mathematician.

Most Popular MATHEMATICIANS in Wikipedia