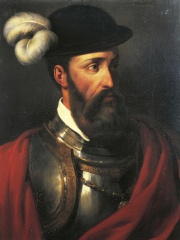 Francisco Pizarro González (; Spanish: [fɾanˈθisko piˈθaro]; c. 1471-1476 – 26 June 1541) was a Spanish conquistador, best known for his expeditions that led to the Spanish conquest of Peru. Born in Trujillo, Spain to a poor family, Pizarro chose to pursue fortune and adventure in the New World. He went to the Gulf of Urabá, and accompanied Vasco Núñez de Balboa in his crossing of the Isthmus of Panama, where they became the first Europeans to reach the Pacific Ocean. Read more on Wikipedia

Since 2007, the English Wikipedia page of Francisco Pizarro has received more than 2,097,287 page views. His biography is available in 75 different languages on Wikipedia making him the 13th most popular explorer.

Among explorers, Francisco Pizarro ranks 13 out of 367. Before him are James Cook, Hernán Cortés, Ibn Battuta, Bartolomeu Dias, Zheng He, and Francis Drake. After him are Fridtjof Nansen, Prince Henry the Navigator, Jacques Cartier, Leif Erikson, David Livingstone, and Jacques Cousteau.

Among EXPLORERS In Spain