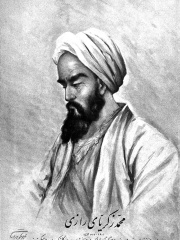 Abū Bakr al-Rāzī (full name: أبو بکر محمد بن زکریاء الرازي, Abū Bakr Muḥammad bin Zakariyyāʾ al-Rāzī), c. 864 or 865–925 or 935 CE, often known as (al-)Razi or by his Latin name Rhazes, was a Persian physician, philosopher and alchemist who lived during the Islamic Golden Age. He is widely considered one of the most important figures in the history of medicine, and also wrote on logic, astronomy and grammar.A comprehensive thinker, al-Razi made fundamental and enduring contributions to various fields, which he recorded in over 200 manuscripts, and is particularly remembered for numerous advances in medicine through his observations and discoveries. An early proponent of experimental medicine, he became a successful doctor, and served as chief physician of Baghdad and Ray hospitals. Read more on Wikipedia

Muhammad ibn Zakariya al-Razi (865-925) was a Persian polymath, physician, alchemist, philosopher, and important figure in the history of medicine. He wrote more than 200 works on a wide range of subjects, of which around 50 have survived. His most famous work is The Comprehensive Book of Medicine, which was translated into Latin and remained a standard medical text in Europe for centuries.

Among physicians, Muhammad ibn Zakariya al-Razi ranks 14 out of 509. Before him are Robert Koch, L. L. Zamenhof, Basil of Caesarea, Albert Schweitzer, Andreas Vesalius, and William Harvey. After him are Cyril of Alexandria, Cesare Lombroso, Nestorius, Alois Alzheimer, Pedanius Dioscorides, and Li Ching-Yuen.

Among PHYSICIANS In Iran