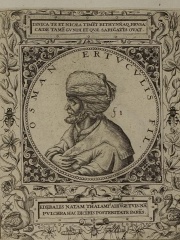 Osman I or Osman Ghazi (Ottoman Turkish: عثمان غازى, romanized: ʿOsmān Ġāzī; Turkish: I. Osman or Osman Gazi; died 1323/4), sometimes transliterated archaically as Othman, was the founder of the Ottoman Empire (first known as the Ottoman Beylik or Emirate). While initially a small Turkoman principality during Osman's lifetime, his descendants transformed into a world empire in the centuries after his death. It existed until shortly after the end of World War I. Owing to the scarcity of historical sources dating from his lifetime, very little factual information about Osman has survived. Read more on Wikipedia

Osman I is most famous for founding the Ottoman Empire.

Page views of Osman IS by language

Among politicians, Osman I ranks 32 out of 15,577. Before him are Mikhail Gorbachev, Attila, Hurrem Sultan, Mao Zedong, Queen Victoria, and Commodus. After him are Abraham Lincoln, Qin Shi Huang, Louis XVI of France, Charles V, Holy Roman Emperor, Justinian I, and Richard III of England.

Among people born in 1254, Osman I ranks 2. Before him is Marco Polo. After him are Charles II of Naples, Marie of Brabant, Queen of France, Zhao Mengfu, Floris V, Count of Holland, and Dmitry of Pereslavl. Among people deceased in 1327, Osman I ranks 1. After him are Edward II of England, Saint Roch, James II of Aragon, Agnes of France, Duchess of Burgundy, Elizabeth de Burgh, Anne of Austria, Margravine of Brandenburg, and Adolf, Count Palatine of the Rhine.