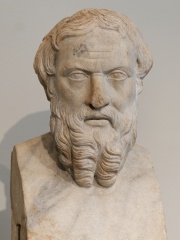 Herodotus (; Ancient Greek: Ἡρόδοτος, Hēródotos, Attic Greek pronunciation: [hɛː.ró.do.tos]; c. 484 – c. 425 BC) was an ancient Greek historian who was born in Halicarnassus in the Persian Empire (modern-day Bodrum, Turkey). He is known for having written the book The Histories (Greek: Ἱστορίαι Historíai), a detailed record of his "inquiry" (ἱστορία historía) on the origins of the Greco-Persian Wars. He is widely considered to have been the first writer to have treated historical subjects using a method of systematic investigation—specifically, by collecting his materials and then critically arranging them into an historiographic narrative. Read more on Wikipedia

Since 2007, the English Wikipedia page of Herodotus has received more than 3,462,032 page views. His biography is available in 124 different languages on Wikipedia making him the most popular historian.

Page views of Herodotuses by language

Others Deceased in 425 BC

Among HISTORIANS In Turkey