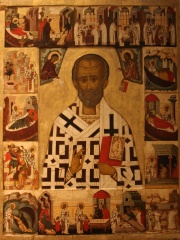 Saint Nicholas of Myra (traditionally 15 March 270 – 6 December 343), also known as Nicholas of Bari, was an early Christian bishop of Greek descent from the maritime city of Myra in Asia Minor (Greek: Μύρα; modern-day Demre, Turkey) during the time of the Roman Empire. Because of the many miracles attributed to his intercession, he is also known as Nicholas the Wonderworker. Saint Nicholas is the patron saint of sailors, merchants, archers, repentant thieves, children, brewers, pawnbrokers, unmarried people, and students in various cities and countries around Europe. Read more on Wikipedia

Saint Nicholas is most famous for his generous gifts to children. He is also the patron saint of sailors, merchants, and children.

Among religious figures, Saint Nicholas ranks 13 out of 2,238. Before him are Pope Francis, Paul the Apostle, Solomon, Saint Peter, John the Baptist, and Zoroaster. After him are Jacob, Pope John Paul II, Francis of Assisi, Aaron, Isaac, and Saint George.