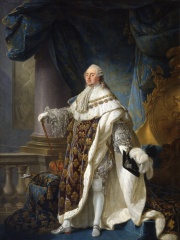 Louis XVI (Louis-Auguste; French pronunciation: ​[lwi sɛːz]; 23 August 1754 – 21 January 1793) was the last King of France before the fall of the monarchy during the French Revolution. He was referred to as Citizen Louis Capet during the four months just before he was executed by guillotine. He was the son of Louis, Dauphin of France, son and heir-apparent of King Louis XV, and Maria Josepha of Saxony. Read more on Wikipedia

Louis XVI was the king of France from 1774 to 1792. He is most famous for being the king during the French Revolution, where he was executed by guillotine.

Page views of Louis XVI of Frances by language

Among politicians, Louis XVI of France ranks 35 out of 15,577. Before him are Mao Zedong, Queen Victoria, Commodus, Osman I, Abraham Lincoln, and Qin Shi Huang. After him are Charles V, Holy Roman Emperor, Justinian I, Richard III of England, Umar, Selim II, and Franz Joseph I of Austria.