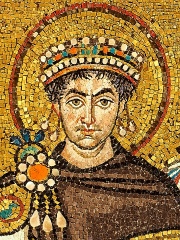 Justinian I (; Latin: Flavius Petrus Sabbatius Iustinianus; Greek: Ἰουστινιανός Ioustinianos; 482 – 14 November 565), also known as Justinian the Great, was the Byzantine emperor from 527 to 565. His reign is marked by the ambitious but only partly realized renovatio imperii, or "restoration of the Empire". This ambition was expressed by the partial recovery of the territories of the defunct Western Roman Empire. Read more on Wikipedia

Justinian I was the Byzantine emperor from 527-565. He is most famous for his codification of Roman law, which is still used in many countries today.

Page views of Justinian IS by language

Among politicians, Justinian I ranks 34 out of 15,710. Before him are Abraham Lincoln, Queen Victoria, Carles Puigdemont, Mikhail Gorbachev, Nero, and Louis XVI of France. After him are Marcus Aurelius, Charles V, Holy Roman Emperor, Pericles, Huang Xianfan, Qin Shi Huang, and David.