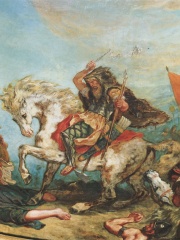 Attila (, ; fl. c. 406–453), frequently called Attila the Hun, was the ruler of the Huns from 434 until his death in March 453. He was also the leader of a tribal empire consisting of Huns, Ostrogoths, Alans, and Bulgars, among others, in Central and Eastern Europe. During his reign, he was one of the most feared enemies of the Western and Eastern Roman Empires. Read more on Wikipedia

Attila is most famous for being the leader of the Huns, a nomadic group of people who invaded Europe in the 5th century. He was responsible for the death of many people and the destruction of many cities and towns.

Page views of Attilas by language

Among politicians, Attila ranks 27 out of 15,577. Before him are Tutankhamun, Hannibal, Otto von Bismarck, Hammurabi, Cicero, and Mikhail Gorbachev. After him are Hurrem Sultan, Mao Zedong, Queen Victoria, Commodus, Osman I, and Abraham Lincoln.