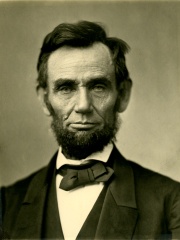 Abraham Lincoln ( LINK-ən; February 12, 1809 – April 15, 1865) was an American lawyer, politician, and statesman who served as the 16th president of the United States from 1861 until his assassination in 1865. Lincoln led the Union through the American Civil War to defend the nation as a constitutional union and succeeded in abolishing slavery, bolstering the federal government, and modernizing the U.S. economy. Lincoln was born into poverty in a log cabin in Kentucky and was raised on the frontier, primarily in Indiana. He was self-educated and became a lawyer, Whig Party leader, Illinois state legislator, and U.S. Read more on Wikipedia

Abraham Lincoln is most famous for being the 16th president of the United States. He led the country through the Civil War, which was a conflict between the Northern and Southern states. Lincoln was assassinated in 1865.

Among politicians, Abraham Lincoln ranks 33 out of 15,577. Before him are Attila, Hurrem Sultan, Mao Zedong, Queen Victoria, Commodus, and Osman I. After him are Qin Shi Huang, Louis XVI of France, Charles V, Holy Roman Emperor, Justinian I, Richard III of England, and Umar.