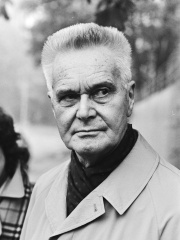 Jan Tinbergen (; Dutch: [ˈtɪnˌbɛrɣə(n)]; April 12, 1903 – June 9, 1994) was a Dutch economist who was awarded the first Nobel Memorial Prize in Economic Sciences in 1969, which he shared with Ragnar Frisch for having developed and applied dynamic models for the analysis of economic processes. He is widely considered to be one of the most influential economists of the 20th century and one of the founding fathers of econometrics. It has been argued that the development of the first macroeconometric models, the solution of the identification problem, and the understanding of dynamic models are his three most important legacies to econometrics. Read more on Wikipedia

Jan Tinbergen was a Dutch economist who won the first Nobel Prize in Economics in 1969. He is most famous for his work on econometrics and the use of game theory to understand economic decision-making.

Among ECONOMISTS In Netherlands

Among economists born in Netherlands, Jan Tinbergen ranks 1. After him are Bernard Mandeville (1670), Tjalling Koopmans (1910), and Euclid Tsakalotos (1960).