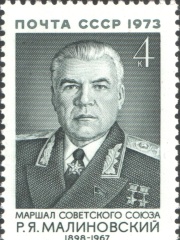 Rodion Yakovlevich Malinovsky (Russian: Родио́н Я́ковлевич Малино́вский; 23 November [O.S. 11 November] 1898 – 31 March 1967) was a Soviet military commander in World War II, Marshal of the Soviet Union, and Minister of Defence of the Soviet Union in the late 1950s and 1960s. He contributed to the major defeat of Nazi Germany at the Battle of Stalingrad and the Battle of Budapest. Read more on Wikipedia

Rodion Malinovsky was a Soviet military commander who led the Red Army to victory in World War II. He is most famous for being the commander of the Soviet Union's Second Strategic Echelon, and for his role in the Battle of Stalingrad.

Among politicians, Rodion Malinovsky ranks 1,813 out of 15,710. Before him are Abd al-Rahman II, Sheikh Mujibur Rahman, Sophia Alekseyevna of Russia, Burhanuddin Rabbani, John VI of Portugal, and 1st Dalai Lama. After him are Leopold, Duke of Lorraine, John Frederick I, Elector of Saxony, Henry II of Castile, Edgar the Peaceful, Ferdinand I of Naples, and Charles VIII of Sweden.