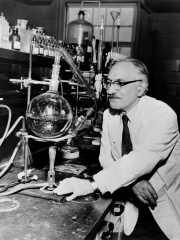 Selman Abraham Waksman (July 22, 1888 – August 16, 1973) was a Jewish Russian Empire-born American inventor, biochemist and microbiologist whose research into the decomposition of organisms that live in soil enabled the discovery of streptomycin and several other antibiotics. A professor of biochemistry and microbiology at Rutgers University for four decades, he discovered a number of antibiotics (and introduced the modern sense of that word to name them), and he introduced procedures that have led to the development of many others. The proceeds earned from the licensing of his patents funded a foundation for microbiological research, which established the Waksman Institute of Microbiology located on the Rutgers University Busch Campus in Piscataway, New Jersey (USA). Read more on Wikipedia

Selman Waksman was a microbiologist that discovered streptomycin, which is a drug that can be used to treat tuberculosis.

Among PHYSICIANS In Ukraine