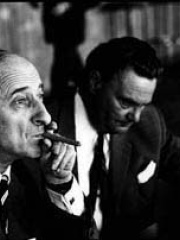 Raymond Claude Ferdinand Aron (French: [ʁɛmɔ̃ aʁɔ̃]; 14 March 1905 – 17 October 1983) was a French philosopher, sociologist, political scientist, and journalist. Aron is best known for his 1955 book The Opium of the Intellectuals, the title of which inverts Karl Marx's claim that religion was the opium of the people; he argues that Marxism was the opium of the intellectuals in post-war France. In the book, Aron chastised French intellectuals for what he described as their harsh criticism of capitalism and democracy and their simultaneous defense of Marxist oppression, atrocities, and intolerance. Read more on Wikipedia

Raymond Aron was a French philosopher, sociologist, and historian who is most famous for his contributions to the theory of totalitarianism.

Among philosophers, Raymond Aron ranks 258 out of 1,089. Before him are Otto Weininger, Arcesilaus, Al-Ash'ari, Speusippus, Bias of Priene, and Xenocrates. After him are Moritz Schlick, Bruno Bauer, Roger Garaudy, Al-Jahiz, Shen Kuo, and Priscus.