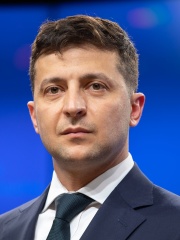 Volodymyr Oleksandrovych Zelenskyy (also transliterated as Zelensky or Zelenskiy; born 25 January 1978) is a Ukrainian politician and former comedian and actor who has served as the sixth and current president of Ukraine since 2019. Born to a Ukrainian Jewish family, Zelenskyy grew up as a native Russian speaker in Kryvyi Rih, a major city of Dnipropetrovsk Oblast in central Ukraine. Prior to his acting career, he obtained a degree in law from the Kyiv National Economic University. Read more on Wikipedia

Among politicians, Volodymyr Zelensky ranks 2,164 out of 15,577. Before him are Hostilian, Archduchess Maria Anna of Austria, Talal of Jordan, Sarah Churchill, Duchess of Marlborough, Rajendra Prasad, and Qutuz. After him are Vitiges, Elisabeth Ludovika of Bavaria, Töregene Khatun, King Zhou of Shang, Tariq Aziz, and Muhammad I Tapar.