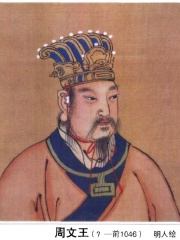 King Wen of Zhou (Chinese: 周文王; pinyin: Zhōu Wén Wáng; 1112–1050 BC, the Civilizing King) was Count of Zhou during the late Shang dynasty in ancient China. Although frequently confused with the Duke of Zhou, also known as "Lord Zhou", they are different historical personalities. Although it was his son Wu who conquered the Shang following the Battle of Muye, Count Wen was posthumously honored as the founder of the Zhou dynasty and titled King. Read more on Wikipedia

King Wen of Zhou is most famous for his work as a military strategist. He is credited with the invention of the "Six Secret Teachings," which is a collection of military strategies and tactics that are still used today.

Page views of King Wen of Zhous by language

Among politicians, King Wen of Zhou ranks 1,978 out of 15,710. Before him are Talal of Jordan, Jürgen Stroop, Ali Abdullah Saleh, François Darlan, Taichang Emperor, and Richard II, Duke of Normandy. After him are Austen Chamberlain, Maria Luisa of Spain, Babrak Karmal, Charles III, Duke of Bourbon, Alfonso the Battler, and Bimbisara.