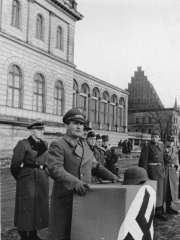 Karl August Hanke (24 August 1903 – 8 June 1945) was an official of the Nazi Party (NSDAP) during its rule over Germany and served as the fifth and last Reichsführer of the Schutzstaffel (SS). He also served as Gauleiter of Gau Lower Silesia from 1941 to 1945 and as Oberpräsident of the Prussian Province of Lower Silesia. Read more on Wikipedia

Karl Hahn was a German mathematician who was most famous for proving that there is no general algorithm for determining whether a given Diophantine equation has an integer solution.

Among politicians, Karl Hanke ranks 1,901 out of 15,577. Before him are Emmanuel Philibert, Duke of Savoy, Maria Sophie of Bavaria, Alfonso II of Aragon, Amenmesse, Zhengde Emperor, and Alassane Ouattara. After him are William IV, Prince of Orange, Pleistarchus, Melisende, Queen of Jerusalem, Baldwin III of Jerusalem, Clodius Albinus, and Grand Duke Dmitri Pavlovich of Russia.