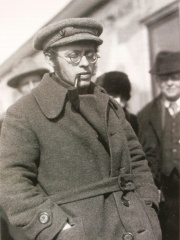 Karl Berngardovich Radek (Russian: Карл Бернгардович Радек; 31 October 1885 – 19 May 1939) was a Marxist active in the Polish and German social democratic movements before World War I and an international Communist leader in the Soviet Union after the Russian Revolution. Read more on Wikipedia

Karl Radek was a communist activist and journalist who advocated for the overthrow of capitalism and the establishment of a socialist state. He was a member of the German Communist Party and the Communist International.

Among politicians, Karl Radek ranks 2,040 out of 15,710. Before him are Yuan Shu, Louis Blanc, Pepin of Italy, Alfonso II of Aragon, Euric, and Jean-Jacques Dessalines. After him are Guillaume de Nogaret, Joseph McCarthy, Astyanax, Nikola IV Zrinski, John Sigismund, Elector of Brandenburg, and Vittorio Emanuele Orlando.