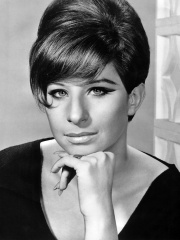 Barbara Joan "Barbra" Streisand (; born April 24, 1942) is an American singer, actress, and filmmaker. In a career spanning six decades, she has achieved success in multiple fields of entertainment and has been recognized with two Academy Awards, ten Grammy Awards including the Grammy Lifetime Achievement Award and the Grammy Legend Award, five Emmy Awards including one Daytime Emmy, a Special Tony Award, the AFI Life Achievement Award, a Kennedy Center Honors prize, four Peabody Awards, the Presidential Medal of Freedom, and nine Golden Globes. She is among a small group of entertainers who have been honored with an Emmy, Grammy, Oscar, and Tony Award – though only three were competitive awards – and is one of only three artists in that group who have also won a Peabody.After beginning a successful recording career in the 1960s, Streisand ventured into film by the end of that decade. Read more on Wikipedia

Since 2007, the English Wikipedia page of Barbra Streisand has received more than 13,155,676 page views. Her biography is available in 80 different languages on Wikipedia making her the 26th most popular singer.