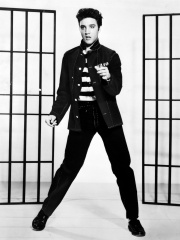 Elvis Aaron Presley (January 8, 1935 – August 16, 1977) was an American singer and actor. Dubbed the "King of Rock and Roll", he is regarded as one of the most significant cultural icons of the 20th century. Read more on Wikipedia

Elvis Presley is most famous for being a singer, actor, and musician. He was born in 1935 in Tupelo, Mississippi and died in 1977 in Memphis, Tennessee.

GeekTyrant
New Clip From ELVIS and Priscilla Presley Shares Her Daughter's Reaction to Watching Baz Luhrmann's Biopic
Director Baz Luhrmann’s Elvis biopic opens next month, and it looks truly incredible. It’s amazing how much Austin Butler looks and sounds like the iconic singer Elvis Presley, but while it’s easy for viewers to think so, it counts so much more coming from th…
Jessica Fisher
Fox News
‘60s star Diane McBain reflects on befriending Elvis Presley, turning down Aaron Spelling’s marriage proposal
A new biopic on Elvis Presley by Baz Luhrmann will hit theaters on June 24. It stars Austin Butler as The King and Tom Hanks as his manager Colonel Tom Parker.
Stephanie Nolasco