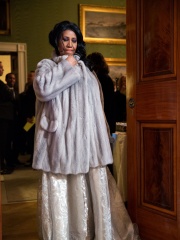 Aretha Louise Franklin ( ə-REE-thə; March 25, 1942 – August 16, 2018) was an American singer, songwriter and pianist. Referred to as the "Queen of Soul", she has twice been placed ninth in Rolling Stone's "100 Greatest Artists of All Time". With global sales of over 75 million records, Franklin is one of the world's best-selling music artists.As a child, Franklin was noticed for her gospel singing at New Bethel Baptist Church in Detroit, Michigan, where her father C. L. Franklin was a minister. Read more on Wikipedia

Aretha Franklin is most famous for her soulful voice and her vocal range. She has been called the "Queen of Soul" and her music has spanned many genres, including blues, gospel, pop, R&B, rock and roll, and jazz.

Among singers, Aretha Franklin ranks 3 out of 3,528. Before her are Elvis Presley and Édith Piaf. After her are Cher, Janis Joplin, Luciano Pavarotti, Maria Callas, Anni-Frid Lyngstad, Charles Aznavour, Dalida, Tina Turner, and Frank Sinatra.