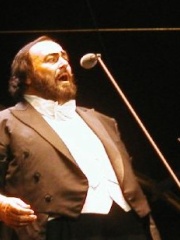 Luciano Pavarotti (, US also , Italian: [luˈtʃaːno pavaˈrɔtti]; 12 October 1935 – 6 September 2007) was an Italian operatic tenor who during the late part of his career crossed over into popular music, eventually becoming one of the most acclaimed tenors of all time. He made numerous recordings of complete operas and individual arias, gaining worldwide fame for his tone, and gaining the nickname "King of the High Cs". As one of the Three Tenors, who performed their first concert during the 1990 FIFA World Cup before a global audience, Pavarotti became well known for his televised concerts and media appearances. Read more on Wikipedia

Luciano Pavarotti was an Italian opera singer. He is most famous for his performances of operas such as La Bohème, Aida, and Turandot.

Among singers, Luciano Pavarotti ranks 6 out of 3,528. Before him are Elvis Presley, Édith Piaf, Aretha Franklin, Cher, and Janis Joplin. After him are Maria Callas, Anni-Frid Lyngstad, Charles Aznavour, Dalida, Tina Turner, and Frank Sinatra.