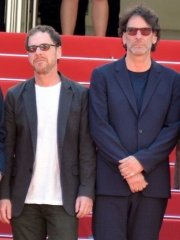 Joel Coen (born November 29, 1954) and Ethan Coen (born September 21, 1957), collectively referred to as The Coen Brothers (), are American film directors, producers, screenwriters, and editors. Their films span many genres and styles, which they frequently subvert or parody. Read more on Wikipedia

Since 2007, the English Wikipedia page of Coen brothers has received more than 8,944,531 page views. Her biography is available in 47 different languages on Wikipedia making her the 181st most popular writer.

Among writers, Coen brothers ranks 179 out of 4,883. Before her are Dale Carnegie, Joseph Conrad, John the Evangelist, Mikhail Bulgakov, Ferdowsi, and François-René de Chateaubriand. After her are Doris Lessing, Nizami Ganjavi, Juvenal, Friedrich Hölderlin, Karel Čapek, and Jean Racine.