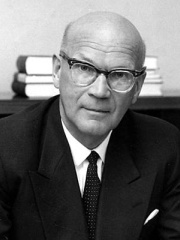 Urho Kaleva Kekkonen (pronounced [ˈurho ˈkekːonen] (listen); 3 September 1900 – 31 August 1986), often referred to by his initials UKK, was a Finnish politician who served as the eighth and longest-serving President of Finland from 1956 until 1982. He was the third and most recent president from the Agrarian League/Center Party. As head of state for nearly 26 years, he dominated Finnish politics, held a large amount of power, won his later elections with little opposition and has often been classified as an autocrat. Read more on Wikipedia

Urho Kekkonen was the president of Finland from 1956 to 1982. He is most famous for being the first Finnish president to visit the Soviet Union.

Among politicians, Urho Kekkonen ranks 1,729 out of 15,710. Before him are José Eduardo dos Santos, Gelimer, Paul Doumer, Jamukha, Emperor Ruizong of Tang, and Hor-Aha. After him are Magnus IV of Sweden, Djet, Emperor Wen of Han, Kubrat, Carinus, and Constans.