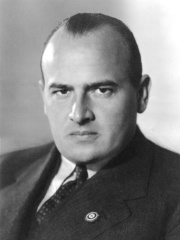 Hans Michael Frank (23 May 1900 – 16 October 1946) was a German politician and lawyer who served as head of the General Government in Nazi-occupied Poland during the Second World War. Frank was an early member of the German Workers' Party (DAP), the precursor of the Nazi Party (NSDAP). He took part in the failed Beer Hall Putsch, and later became Adolf Hitler's personal legal adviser as well as the lawyer of the NSDAP. In June 1933, he was named as a Reichsleiter (Reich Leader) of the party. Read more on Wikipedia

Hans Frank was a German lawyer who served as Adolf Hitler's personal legal advisor. He was the Governor-General of Nazi-occupied Poland from 1939 to 1945. He was sentenced to death by the Nuremberg Tribunal and hanged in October 1946.

Among politicians, Hans Frank ranks 595 out of 15,577. Before him are Frederick William IV of Prussia, Epaminondas, Shah Jahan, Khosrow I, Valens, and Darius II. After him are Ivan III of Russia, Ptolemy XIV of Egypt, Wilhelmina of the Netherlands, Henry II, Holy Roman Emperor, Camillo Benso, Count of Cavour, and Philip the Good.