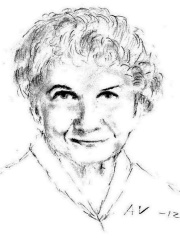 Alice Ann Munro (; née Laidlaw ; born 10 July 1931) is a Canadian short story writer who won the Nobel Prize in Literature in 2013. Munro's work has been described as revolutionizing the architecture of short stories, especially in its tendency to move forward and backward in time. Her stories have been said to "embed more than announce, reveal more than parade."Munro's fiction is most often set in her native Huron County in southwestern Ontario. Read more on Wikipedia

Alice Munro is a Canadian short story writer who has won the Nobel Prize in Literature. She is most famous for her short stories, which are often about ordinary people and their lives.

Among writers, Alice Munro ranks 292 out of 5,755. Before her are Robert Musil, Archilochus, Leopold von Sacher-Masoch, Svetlana Alliluyeva, Ernst Jünger, and Simonides of Ceos. After her are Claude Simon, Marguerite Duras, Filippo Tommaso Marinetti, Margaret Mitchell, Mikhail Sholokhov, and Lucan.