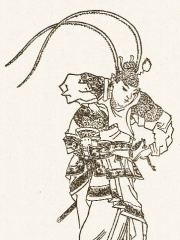 Zhou Yu (Chinese: 周瑜, pronunciation) (175–210), courtesy name Gongjin (Chinese: 公瑾), was a Chinese military general and strategist serving under the warlord Sun Ce in the late Eastern Han dynasty of China. After Sun Ce died in the year 200, he continued serving under Sun Quan, Sun Ce's younger brother and successor. Zhou Yu is primarily known for his leading role in defeating the numerically superior forces of the northern warlord Cao Cao at the Battle of Red Cliffs in late 208, and again at the Battle of Jiangling in 209. Read more on Wikipedia

Since 2007, the English Wikipedia page of Zhou Yu has received more than 580,852 page views. His biography is available in 23 different languages on Wikipedia. Zhou Yu is the 201st most popular military personnel (down from 130th in 2019), the 125th most popular biography from China (down from 85th in 2019) and the 10th most popular Chinese Military Personnel.

Zhou Yu is most famous for being the general of the Sun family during the Three Kingdoms period. He was also a strategist and tactician.