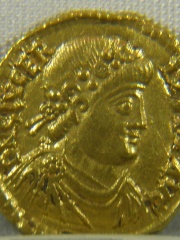 Glycerius (fl. 470s) was Roman emperor of the West from 473 to 474. He served as comes domesticorum (commander of the palace guard) during the reign of Olybrius, until Olybrius died in November 472. After a four-month interregnum, Glycerius was proclaimed Western Emperor in March 473 by the magister militum (master of soldiers) and power behind the throne Gundobad. Read more on Wikipedia

Glycerius is most famous for his work in the field of optics, specifically the study of light and vision. He is credited with inventing the camera obscura and pinhole camera.

Page views of Glyceriuses by language

Among politicians, Glycerius ranks 1,686 out of 15,577. Before him are Shapur II, Teti, Li Xiannian, Béla I of Hungary, Senusret I, and Achaemenes. After him are Emperor Suizei, Humayun, Clovis II, Francis, Duke of Guise, Ferdinand II of the Two Sicilies, and Ehud Olmert.