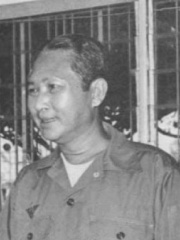 Marshal Lon Nol (Khmer: លន់ នល់, also លន់ ណុល; 13 November 1913 – 17 November 1985) was a Cambodian politician and general who served as Prime Minister of Cambodia twice (1966–67; 1969–71), as well as serving repeatedly as defence minister and provincial governor. As a nationalist and conservative, he led the military coup of 1970 against Prince Norodom Sihanouk, abolished the monarchy, and established the short-lived Khmer Republic. Constitutionally a semi-presidential republic, Cambodia was de facto governed under a military dictatorship. Read more on Wikipedia

Lon Nol was a Cambodian military general who served as the Prime Minister of Cambodia from 1970 to 1975. He is most famous for leading the fight against the Khmer Rouge and their leader, Pol Pot.

Among politicians, Lon Nol ranks 1,648 out of 15,710. Before him are Li Xiannian, Anna Maria Mozart, Teia, Ferdinand I of Aragon, Otto of Bavaria, and Öz Beg Khan. After him are Kurt Daluege, Alfonso V of Aragon, Emil Hácha, Emperor Zhongzong of Tang, Mago Barca, and Clovis II.