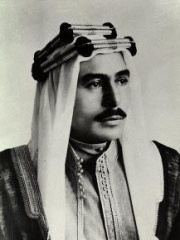 Talal bin Abdullah (Arabic: طلال بن عبد الله, Ṭalāl ibn ʻAbd Allāh; 26 February 1909 – 7 July 1972) was King of Jordan from the assassination of his father, King Abdullah I, on 20 July 1951 until his forced abdication on 11 August 1952. As a member of the Hashemite dynasty, the royal family of Jordan since 1921, Talal was a 39th-generation direct descendant of Muhammad.Talal was born in Mecca as the eldest child of Abdullah bin Hussein and his wife Musbah bint Nasser. Abdullah was a son of Hussein bin Ali, Sharif of Mecca, who led the Great Arab Revolt during World War I against the Ottoman Empire in 1916. Read more on Wikipedia

Talal of Jordan is most famous for being the son of King Hussein of Jordan.

Page views of Talal of Jordans by language

Among politicians, Talal of Jordan ranks 1,972 out of 15,710. Before him are Maymunah bint al-Harith, Louise of Orléans, Khasekhemwy, Donald Rumsfeld, François Ravaillac, and Adolphe, Grand Duke of Luxembourg. After him are Jürgen Stroop, Ali Abdullah Saleh, François Darlan, Taichang Emperor, Richard II, Duke of Normandy, and King Wen of Zhou.