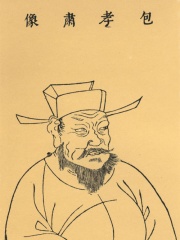 Bao Zheng (包拯; Bāo Zhěng; 5 March 999 – 3 July 1062), commonly known as Bao Gong (包公; Bāo Gōng; 'Lord Bao'), was a Chinese politician during the reign of Emperor Renzong in China's Song Dynasty. During his twenty-five years in civil service, Bao consistently demonstrated extreme honesty and uprightness, with actions such as sentencing his own uncle, impeaching an uncle of Emperor Renzong's favourite concubine and punishing powerful families. His appointment from 1057 to 1058 as the prefect of Song's capital Kaifeng, where he initiated a number of changes to better hear the grievances of the people, made him a legendary figure. Read more on Wikipedia

Bao zheng is most famous for being a type of Chinese medicine that is used to treat headaches.

Among politicians, Bao Zheng ranks 1,767 out of 15,577. Before him are Uesugi Kenshin, Ladislaus IV of Hungary, Ali Abdullah Saleh, Conradin, Chilperic II, and Alaeddin Pasha. After him are Kim Jong-un, Al-Musta'sim, Hyojong of Joseon, Aslan Maskhadov, Ferdinand III, Grand Duke of Tuscany, and Albert I, Prince of Monaco.