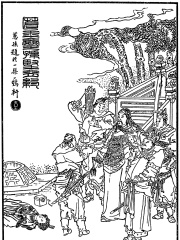 Sun Jian (Chinese: 孫堅; pinyin: Sūn Jiān) (pronunciation ) (155–191?), courtesy name Wentai, was a Chinese military general, politician, and warlord who lived during the late Eastern Han dynasty of China. He allied himself with Yuan Shu in 190 when warlords from eastern China formed a coalition to oust Dong Zhuo, a tyrannical warlord who held the puppet Emperor Xian in his power. Although he controlled neither many troops nor much land, Sun Jian's personal bravery and resourcefulness were feared by Dong Zhuo, who placed him among Yuan Shao, Yuan Shu and Liu Biao as the most influential men at that time. Read more on Wikipedia

Sun Jian was a general who served under the warlord Yuan Shao in the late Eastern Han Dynasty. He was known for his military victories and his death at the Battle of Wancheng.