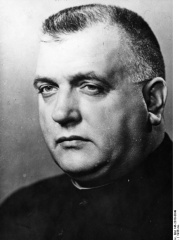 Jozef Gašpar Tiso (Slovak pronunciation: [ˈjɔzef ˈtisɔ]; Hungarian: Tiszó József; 13 October 1887 – 18 April 1947) was a Slovak politician and Roman Catholic priest who served as president of the Slovak Republic, a client state of Nazi Germany during World War II, from 1939 to 1945. In 1947, after the war, he was executed for war crimes and crimes against humanity in Bratislava. Born in 1887 to Slovak parents in Nagybiccse (today Bytča), then part of Hungary, Austria-Hungary, Tiso studied several languages during his school career, including Hebrew and German. Read more on Wikipedia

Jozef Tiso was the leader of the Slovakian Nazi puppet government during World War II.

Among politicians, Jozef Tiso ranks 849 out of 15,710. Before him are Nikephoros II Phokas, Ali Pasha of Ioannina, Jadwiga of Poland, Eduard Bernstein, Stanisław Leszczyński, and Julius Nepos. After him are Hassan II of Morocco, Henry Stuart, Lord Darnley, Richard von Coudenhove-Kalergi, Béla Kun, Louis, Duke of Burgundy, and Valentinian II.