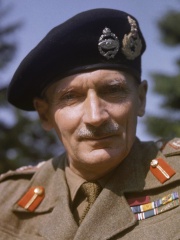 Field Marshal Bernard Law Montgomery, 1st Viscount Montgomery of Alamein, (; 17 November 1887 – 24 March 1976), nicknamed "Monty" and "The Spartan General", was a senior British Army officer who fought in both the First World War and the Second World War. Montgomery first saw action in the First World War as a junior officer of the Royal Warwickshire Regiment. At Méteren, near the Belgian border at Bailleul, he was shot through the right lung by a sniper, during the First Battle of Ypres. Read more on Wikipedia

Since 2007, the English Wikipedia page of Bernard Montgomery has received more than 2,332,290 page views. His biography is available in 65 different languages on Wikipedia making him the 60th most popular military personnel.