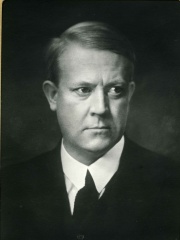 Vidkun Abraham Lauritz Jonssøn Quisling (, Norwegian: [ˈvɪ̂dkʉn ˈkvɪ̂slɪŋ] (listen); 18 July 1887 – 24 October 1945) was a Norwegian military officer, politician and Nazi collaborator who nominally headed the government of Norway during the country's occupation by Nazi Germany during World War II. He first came to international prominence as a close collaborator of the explorer Fridtjof Nansen, and through organising humanitarian relief during the Russian famine of 1921 in Povolzhye. He was posted as a Norwegian diplomat to the Soviet Union and for some time also managed British diplomatic affairs there. Read more on Wikipedia

Vidkun Quisling was a Norwegian politician who was a Nazi collaborator. He was the Prime Minister of Norway from 1942 to 1945.

Among politicians, Vidkun Quisling ranks 1,121 out of 15,577. Before him are Andrei Zhdanov, Asparuh of Bulgaria, Stephen, King of England, Jungjong of Joseon, Ur-Nammu, and Eric Bloodaxe. After him are Ilham Aliyev, Wang Mang, Piero di Cosimo de' Medici, Idris of Libya, Albert II of Germany, and William II of the Netherlands.