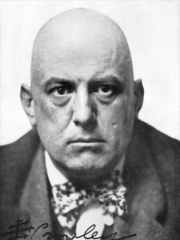 Aleister Crowley (; born Edward Alexander Crowley; 12 October 1875 – 1 December 1947) was an English occultist, ceremonial magician, poet, painter, novelist, and mountaineer. He founded the religion of Thelema, identifying himself as the prophet entrusted with guiding humanity into the Æon of Horus in the early 20th century. Read more on Wikipedia

Aleister Crowley was a British occultist, ceremonial magician, poet, painter, novelist, and mountaineer. He founded the religion of Thelema, which became adopted by the Ordo Templi Orientis (O.T.O.) as well as the magical order Argenteum Astrum, the Order of the Silver Star. He was also a highly controversial member of the Hermetic Order of the Golden Dawn, where he was known by the magical name of Frater Perdurabo.

Among occultists, Aleister Crowley ranks 8 out of 37. Before him are Grigori Rasputin, Rajneesh, Baba Vanga, John Dee, Helena Blavatsky, and Count of St. Germain. After him are Alessandro Cagliostro, Anton LaVey, Allan Kardec, Heinrich Cornelius Agrippa, Éliphas Lévi, and Joachim of Fiore.

Among OCCULTISTS In United Kingdom