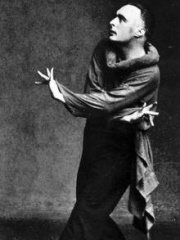 Rudolf von Laban, also known as Rudolf Laban (Hungarian: Rezső Lábán de Váraljas, Lábán Rezső, Lábán Rudolf; 15 December 1879 – 1 July 1958), was an Austro-Hungarian dance artist and theorist. He is considered as one of the pioneers of modern dance in Europe as the "Founding Father of the Expressionist Dance" in Germany. His work laid the foundations for Laban Movement Analysis, Labanotation (Kinetography Laban), other more specific developments in dance notation and the evolution of many varieties of Laban movement analysis. Read more on Wikipedia

Rudolf von Laban is most famous for his work in the field of dance. He developed Labanotation, a system of notating choreography.

Among politicians, Rudolf von Laban ranks 2,755 out of 15,710. Before him are Mentuhotep I, Pelopidas, Eduard Limonov, Mohamed Hussein Tantawi, Erna Solberg, and Franz I, Prince of Liechtenstein. After him are Gnaeus Domitius Corbulo, Cleopatra Selene of Syria, Marie of Luxembourg, Queen of France, Kanishka, Prince Napoléon Bonaparte, and Prince George of Greece and Denmark.