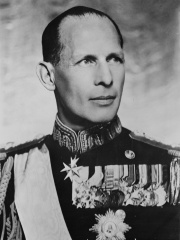 George II (Greek: Γεώργιος Βʹ, Geórgios II; 19 July [O.S.: 7 July] 1890 – 1 April 1947) was King of Greece from September 1922 to March 1924 and from November 1935 to his death in April 1947. The eldest son of King Constantine I and Sophia of Prussia, George followed his father into exile in 1917 following the National Schism, while his younger brother Alexander was installed as king. Constantine was restored to the throne in 1920 but was forced to abdicate two years later in the aftermath of the Greco-Turkish War. Read more on Wikipedia

George II of Greece was most famous for his role in the Balkan Wars and World War I.

Page views of George II of Greeces by language

Among politicians, George II of Greece ranks 992 out of 15,577. Before him are Ulrika Eleonora, Queen of Sweden, Zoë Porphyrogenita, Phocas, 5th Dalai Lama, Muhammad II of Khwarazm, and Clement Attlee. After him are Josep Borrell, Alauddin Khalji, Leo VI the Wise, Maurice, Prince of Orange, Justinian II, and Gudea.