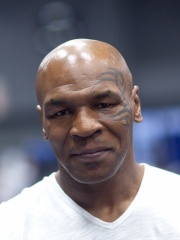 Michael Gerard Tyson (born June 30, 1966) is an American former professional boxer who competed from 1985 to 2005. He reigned as the undisputed world heavyweight champion from 1987 to 1990 and was the first heavyweight boxer to simultaneously hold the WBA, WBC, and IBF titles, as well as the only heavyweight to successively unify them. Claiming his first belt at 20 years, four months, and 22 days old, Tyson holds the record as the youngest boxer to win a heavyweight title.Tyson won his first 19 professional fights by knockout, 12 of them in the first round. Read more on Wikipedia

Since 2007, the English Wikipedia page of Mike Tyson has received more than 25,380,727 page views. His biography is available in 70 different languages on Wikipedia making him the 4th most popular boxer.

RT
Drug testing 'a major concern' for Mike Tyson vs Roy Jones Jr comeback showdown
More controversy has hit Mike Tyson's exhibition clash with Roy Jones Jr in September as it's been reported that drug-testing for the event is a "major concern", with both fighters yet to be tested with just under six weeks to go. Read Full Article at RT.com
RT
MMA Fighting
Dana White to visit Mike Tyson camp, ‘100 percent supportive’ of Roy Jones Jr. fight
Dana White has been critical of older fighters competing in the past, but he’s fully on board for the upcoming exhibition fight between Mike Tyson and Roy Jones Jr.
Steven Marrocco
RT
Russia's Pavlyuchenkova becomes first women's champ in Ultimate Tennis Showdown event set up by Serena coach & hyped by Mike Tyson
Russia's Anastasia Pavlyuchenkova has been crowned the first ever women's champion of the Ultimate Tennis Showdown (UTS) – the fast and frenetic exhibition format set up by Patrick Mouratoglou, longtime coach of Serena Williams. Read Full Article at RT.com
RT
CBS Sports
Mike Tyson vs. Roy Jones Jr. fight card: Three wild undercard bouts we'd like to see added to PPV event
We came up with three wild fights to fit the theme of Mike Tyson's in-ring return against Roy Jones Jr.
Brent Brookhouse