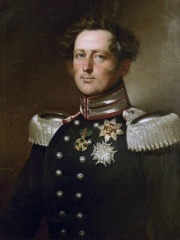 Leopold (29 August 1790 – 24 April 1852) succeeded in 1830 as the Grand Duke of Baden, reigning until his death in 1852. Although a younger child, Leopold was the first son of Margrave Karl Friederich of Baden by his second, morganatic wife, Louise Karoline Geyer von Geyersberg. Since Luise Karoline was not of equal birth with the Margrave, the marriage was deemed morganatic and the resulting children were perceived as incapable of inheriting their father's dynastic status or the sovereign rights of the Zähringen House of Baden. Read more on Wikipedia

Leopold was the Grand Duke of Baden from 1852 to 1907. He is most famous for his liberal reforms in Baden. He abolished serfdom, introduced a constitution, and granted universal suffrage.

Page views of Leopold, Grand Duke of Badens by language

Among politicians, Leopold, Grand Duke of Baden ranks 4,164 out of 15,577. Before him are François Tombalbaye, Inge the Younger, Leo Kanner, Fatma Sultan, Patriarch Filaret of Moscow, and Louis-Eugène Cavaignac. After him are Luigi Einaudi, Stanisław Żółkiewski, Kim Yong-ju, Valerius Valens, Catherine of Saxe-Lauenburg, and Stentor.