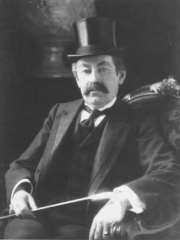 ‹See Tfd› Aristide Pierre Henri Briand (French: [aʁistid pjɛʁ ɑ̃ʁi bʁijɑ̃]; 28 March 1862 – 7 March 1932) was a French statesman who served eleven terms as Prime Minister of France during the French Third Republic. He is mainly remembered for his focus on international issues and reconciliation politics during the interwar period (1918–1939). In 1926, he received the Nobel Peace Prize along with German Foreign Minister Gustav Stresemann for the realization of the Locarno Treaties, which aimed at reconciliation between France and Germany after the First World War. Read more on Wikipedia

Aristide Briand was a French politician who was most famous for being the architect of the Treaty of Versailles and the Locarno Treaties.

Among politicians, Aristide Briand ranks 1,348 out of 15,577. Before him are Giorgio Napolitano, Rafael Trujillo, Injo of Joseon, Emperor Xian of Han, Karolos Papoulias, and John V Palaiologos. After him are Horst Köhler, Ferdinand III of Castile, Frederick I of Denmark, Colin Powell, John Tyler, and Anne Neville.