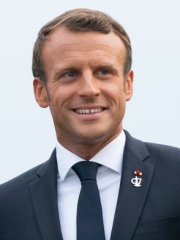 Emmanuel Jean-Michel Frédéric Macron (French: [emanɥɛl ʒɑ̃ miʃɛl fʁedeʁik makʁɔ̃]; born 21 December 1977) is a French politician who has served as president of France since 14 May 2017. Born in Amiens, he studied philosophy at Paris Nanterre University, later completing a master's degree in public affairs at Sciences Po and graduating from the École nationale d'administration in 2004. Read more on Wikipedia

Emmanuel Macron is a French politician who was elected president of France in 2017. He is the youngest president in the country's history.

Among politicians, Emmanuel Macron ranks 1,514 out of 15,710. Before him are Al-Mahdi, Princess Stéphanie of Belgium, Bleda, Conradin, Andrey Vyshinsky, and Chenghua Emperor. After him are Léon Blum, John II of Castile, Mohamed Morsi, Dorgon, Mahmud of Ghazni, and Hiero II of Syracuse.