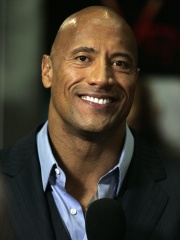 Dwayne Douglas Johnson (born May 2, 1972), also known by his ring name The Rock, is an American actor and former professional wrestler. Widely regarded as one of the greatest professional wrestlers of all time, he was integral to the development and success of the World Wrestling Federation (WWF, now WWE) during the Attitude Era, an industry boom period in the late 1990s and early 2000s. Johnson wrestled for the WWF for eight years prior to pursuing an acting career. Read more on Wikipedia

Dwayne Johnson is most famous for his wrestling career and his acting career. He is most well known for playing in the Fast and Furious series.

Inside the Magic
Dwayne Johnson Denies Allegations After Controversy Arises
Dwayne Johnson has become one of the most recognizable faces in all of Hollywood. Johnson, who got his start as a professional wrestler with the WWF with the name ‘The Rock’, quickly became an icon in Hollywood after starring in an episode of That 70’s Show (…
Andrew Boardwine
ComingSoon.net
Red One: Dwayne Johnson Shares New Look at J.K. Simmons’ Santa
While not too much is known about the upcoming comedy holiday film Red One starring Dwayne Johnson, the actor did recently take to social media to share a photograph of their Santa Claus. The new photos Johnson shared show his character, who seems to be an el…
Anthony Nash