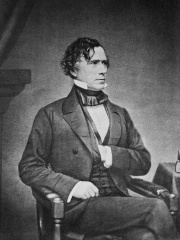 Franklin Pierce (November 23, 1804 – October 8, 1869) was the 14th president of the United States (1853–1857), a northern Democrat who saw the abolitionist movement as a fundamental threat to the unity of the nation. He alienated anti-slavery groups by supporting and signing the Kansas–Nebraska Act and enforcing the Fugitive Slave Act, yet he failed to stem conflict between North and South, setting the stage for Southern secession and the American Civil War. Pierce was born in New Hampshire; he served in the U.S. House of Representatives and Senate until his resignation in 1842. His private law practice was a success, and he was appointed New Hampshire's U.S. Read more on Wikipedia

Since 2007, the English Wikipedia page of Franklin Pierce has received more than 3,987,739 page views. His biography is available in 114 different languages on Wikipedia making him the 1,288th most popular politician.

Among politicians, Franklin Pierce ranks 1,282 out of 14,801. Before him are Alfonso V of Aragon, Hussein bin Ali, Sharif of Mecca, Alexios IV Angelos, Abaqa Khan, Zog I of Albania, and Wenceslaus II of Bohemia. After him are Muawiya II, Pyotr Stolypin, Claudia Octavia, Ernst Thälmann, George II of Greece, and Sunjong of Korea.