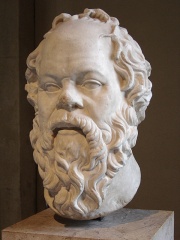 Socrates (; Greek: Σωκράτης; c. 470–399 BC) was a Greek philosopher from Athens who is credited as the founder of Western philosophy and among the first moral philosophers of the ethical tradition of thought. An enigmatic figure, Socrates authored no texts and is known mainly through the posthumous accounts of classical writers, particularly his students Plato and Xenophon. These accounts are written as dialogues, in which Socrates and his interlocutors examine a subject in the style of question and answer; they gave rise to the Socratic dialogue literary genre. Read more on Wikipedia

Socrates is most famous for his contribution to the field of philosophy. He is often considered the father of Western philosophy.

Page views of Socrates by language

Among philosophers, Socrates ranks 3 out of 1,081. Before him are Aristotle and Plato. After him are Confucius, Pythagoras, René Descartes, Gautama Buddha, Immanuel Kant, Jean-Jacques Rousseau, Avicenna, John Locke, and Niccolò Machiavelli.

Others Deceased in 399 BC