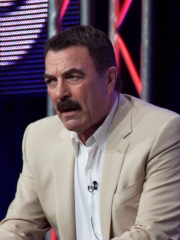 Thomas William Selleck (; born January 29, 1945) is an American actor. His breakout role was playing private investigator Thomas Magnum in the television series Magnum, P.I. (1980–1988), for which he received five Emmy Award nominations for Outstanding Lead Actor in a Drama Series, winning in 1985. Since 2010, Selleck has co-starred as New York City Police Commissioner Frank Reagan in the series Blue Bloods. Beginning in 2005, he has portrayed troubled small-town police chief Jesse Stone in nine television films based on the Robert B. Read more on Wikipedia

Tom selleck is most famous for his role as a detective in the tv show, "Law and Order."