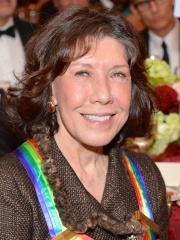 Mary Jean "Lily" Tomlin (born September 1, 1939) is an American actress, comedian, writer, singer, and producer. Tomlin started her career as a stand-up comedian as well as performing Off-Broadway during the 1960s. Her breakout role was on the variety show Rowan & Martin's Laugh-In from 1969 until 1973. Read more on Wikipedia

Since 2007, the English Wikipedia page of Lily Tomlin has received more than 7,565,705 page views. Her biography is available in 36 different languages on Wikipedia making her the 890th most popular actor.