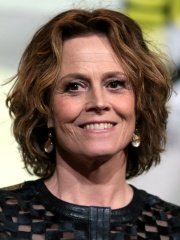 Susan Alexandra "Sigourney" Weaver (; born October 8, 1949) is an American actress. A figure in science fiction and popular culture, she has received various accolades, including a British Academy Film Award, two Golden Globe Awards, and a Grammy Award, in addition to nominations for three Academy Awards, four Primetime Emmy Awards, and a Tony Award. In 2003 she was voted Number 20 in Channel 4's countdown of the 100 Greatest Movie Stars of All Time.Weaver rose to fame when she was cast as Ellen Ripley in the Ridley Scott directed science fiction film Alien (1979), which earned her a nomination for the BAFTA Award for Most Promising Newcomer. Read more on Wikipedia

Sigourney Weaver is most famous for her role as Ellen Ripley in the Alien series.