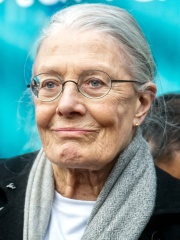 Dame Vanessa Redgrave (born 30 January 1937) is an English actress and activist. Throughout her career spanning over six decades, Redgrave has garnered numerous accolades, including an Academy Award, a Tony Award and two Primetime Emmy Awards, making her one of the few performers to achieve the Triple Crown of Acting. She has also received various honorary awards, including the BAFTA Fellowship Award, the Golden Lion Honorary Award, and an induction into the American Theatre Hall of Fame.Redgrave made her acting debut on stage with the production of A Touch of Sun in 1958. Read more on Wikipedia

Vanessa Redgrave is an English actress, singer, and political activist. She is a Tony Award winner and two-time Academy Award nominee.